Subscribe to the Barossa Nursery Newsletter, to stay up to date with everything that is happening at Barossa Nursery. Receive special deals and handy gardening tips in your inbox.

We respect your priviacy

The Barossa Valley is brimming with picturesque scenery of magnificent wineries, grand old buildings, and unique culture of style and heritage all of its own. Barossa Nursery has proudly been a part of the Barossa Experience since 1951 when Eric Bartsch began growing and supplying seedlings to local farmers. To cater for the increasing demand, the business was relocated to the current site in 1998 and is positioned beautifully on the main road just on the outskirts of Nuriootpa on the short drive to Tanunda.

Like a good wine, Barossa Nursery has just become better with age. From its very humble beginnings, Barossa Nursery has proudly been a part of the Barossa community and has supplied excellent quality plants, gift lines, homewares and lifestyle products to locals and visitors alike and is very much a part of the Barossa Experience. Many of the plants sold are still produced by Eric Bartsch’s son Kevin at the production site just a few minutes away from the retail site. Barossa Nursery has been recognised as not just one of South Australia’s leading Garden Centres but now is proven to be one of Australian’s leading garden centres after winning South Australia’s Best Group Garden Centre 2014 and then followed by the National Best Group Garden Centre for 2014.

Garden Centre Manager Daniel Bartsch is now the third generation of the family involved in the garden centre and along with his mother Erica and the great team at Barossa Nursery, will ensure that a visit to Barossa Nursery is an inspirational and enjoyable adventure. 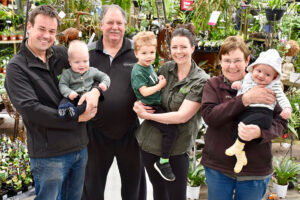 Barossa Nursery is a beautiful garden centre with a great range of plants, gifts, and expert staff to help you in your garden.